Diana Moldoveanu from Laval recounts how a self-interested adventure of discovery was transformed into an invaluable opportunity for assisting others. 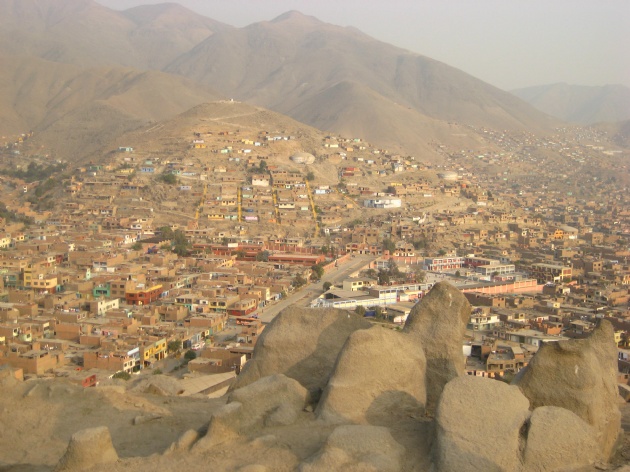 Five years after her first contact with people from a developing country, Diana Moldoveanu recounts how a self-interested adventure of discovery was transformed into an invaluable opportunity for assisting others.

As a small child in her native Romania, Diana often spent long hours contemplating the terrestrial globe that reigned in her grandparents living room. It fueled my curiosity about other places in general. I thought; what is the Nile, the Amazon? What can we find elsewhere?"

It was in a Peruvian población in 2007 that she found the answer. "Elsewhere, she said, there are people with incredible personalities and skills who persevere in their learning and development in spite of unimaginable difficulties. Their determination inspired me to assist them in any way I could.

The young woman was not, however, destined for a career in international cooperation. After her arrival in Quebec at the age of 15, she obtained a degree in biochemistry at the University of Montreal, but realized that science could not offer the opportunities she hoped for. She then left Montreal and a loving boyfriend to undertake an environmental degree at Sherbrooke.

"I finished my undergraduate studies with the determination to selfishly do something I loved, and had no clue where to start. I remember saying; all right, I love nature, languages, discovering places and cultures, and I want to engage in passionate creation. There was no clear notion of altruism, volunteering or anything of the sort, but when I set out to look for opportunities I discovered that I enjoyed engaging with others. In September 2006, I started a graduate program in environment that allowed me to combine everything.

That included two semesters at Sherbrooke, an internship and a semester in Latin America. It convinced me, said Diana.

Together with other interns, she embarked on a plane to Lima, where they would contribute to an environmental project. Most importantly, they would share daily life with local families, which proved a source of invaluable insight into social issues faced by developing countries.

"I did not know what to expect, and I agonized a bit. Then I clung to the idea that it was going to be like in Romania. And indeed, when I first exited the airport, I had the impression of being in Bucharest; the air smelled of car exhaust!, she said jokingly.

After three days of leisure in the Peruvian capital, Diana and her friends travelled to Collique, a shantytown tucked in a valley flanked by two steep, rocky hillsides and located in the Comas district, Lima. "I'd never seen people live in such conditions and thats when I had a real shock - I was worried about my safety", she says in a serious tone. In the end, she had nothing to fear.

Collique was started by rural migrants, who built their homes with what they had on hand when they arrived in Lima in the 50s. Migrant families were typically very poor, not necessarily because they had always been so, but because when they moved from a native village of thousands to a colonial city of millions, they faced a completely different system; whatever served them before  tools, knowledge, connections  suddenly became obsolete. With no cash or access to income, little friends or family, and the disadvantage of their native lineage, they were forced to occupy land illegally and just build from there.

Today, new families continue to arrive in Collique. Their fate is very similar to the initial migrants, since economic activity offers reduced options for employment. Men work in the transportation system or workshops, while women usually travel to Lima where they are employed as domestic workers.

Diana adds; "I had a preconceived idea of life in the favelas because I was not aware of their history. I believed in the too-popular idea that people were lazy and basically deserving of their lot. Instead, I discovered extremely dynamic, satisfied and hopeful individuals organized in a network of support displaying breathtaking creativity to develop self-reliance; women and youth groups, mothers clubs, popular soup canteens, community centers and radio stations. They even had an archaeology museum run by a local aficionado!

However, she adds, while leaders helped build homes, roads and schools, their children didnt seem to fare so well. I was flabbergasted by high-school drop-out rates that, somewhere near 60<>percentage<>, flirted with obscenity! No wonder, I thought, the kids have little chance to exercise their talents in the workplace.

Diana came to understand that most teenagers dropped out because they thought they had no chance to pass the university entrance exam. Moreover, at around age 12, acutely aware of poverty, they chose to work for a few dollars a day. Yet another subtle element that lead them to abandonment, recounts Diana, was the absence of university-educated family members.

The more I spoke with the young people of Collique, the more their struggle became clear to me. I saw a burning desire for learning and affirmation and a scarcity of appropriate opportunities. The young were a little distressed because, unlike previous generations, they had an expectation for social mobility during their own lifetimes.

Everything came together one evening, as Diana was having supper with her Peruvian father; a man of 55, whose promise was to build a sports center for the young. Julio worked relentlessly 6 days a week from 5 am to 10 pm and then woke up on Sunday mornings  every Sunday morning - to mobilize support for the sports center.

I understood right away that I needed to find a manner to assist such leaders in building opportunities for their children. This is when I started thinking about becoming the kind of person people would trust with their hopes and dreams.